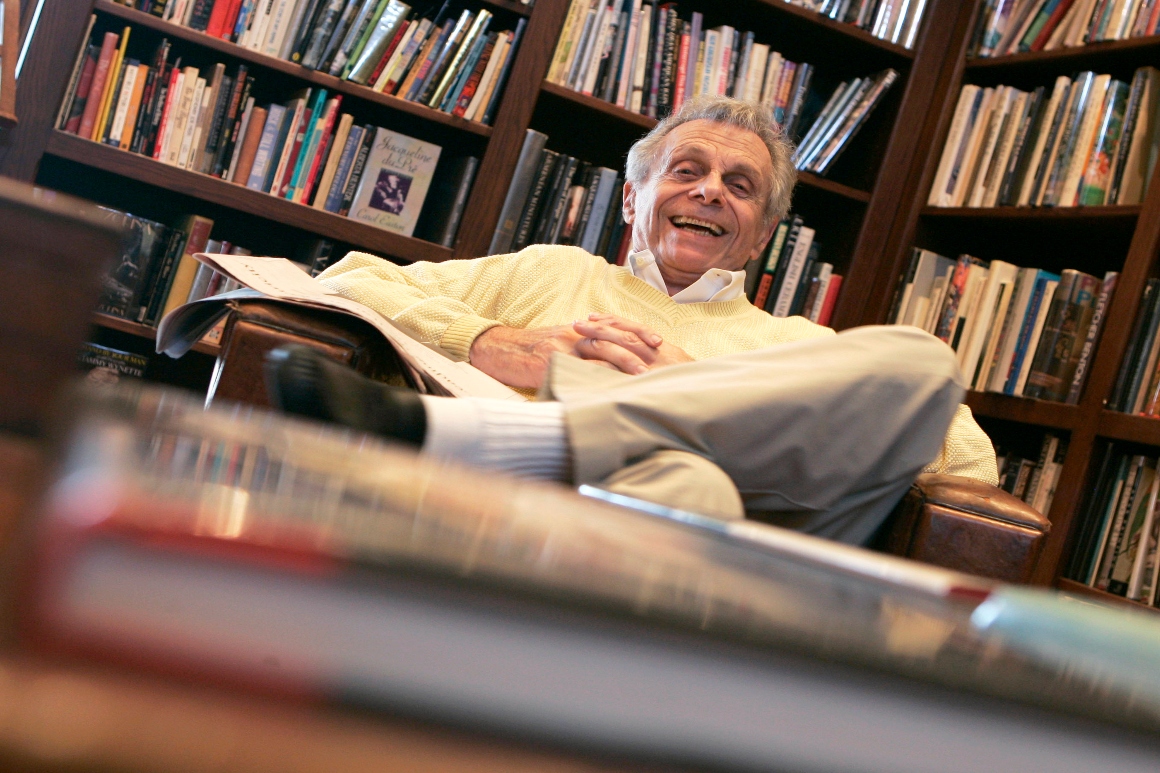 “Every comedian who is not doing wife jokes has to thank him for that,” actor-comedian Albert Brooks told The Associated Press in 2007. “He really was the first, even before Lenny Bruce, in terms of talking about stuff, not just doing punch lines.”

Sahl took pride in having mocked every president from Dwight Eisenhower to Donald Trump, although he acknowledged he privately admired Democrat John F. Kennedy and counted Republican Ronald Reagan among his closest friends. Of President George W. Bush, he observed: “He’s born again, you know. Which would raise the inevitable question: If you were given the unusual opportunity to be born again, why would you come back as George Bush?”

Sahl became famous in 1953 at San Francisco’s hungry i (the i stood for intellectual), the perfect place for a comedian of his type. The city was a meeting ground for beatniks and college activists, and they crowded into the tiny club to hear someone who spoke to their disdain for the status quo. Word spread quickly about the young comedian with the distinctive style. Soon Sahl was earning $7,500 a week at nightclubs across the nation and appearing on television with Steve Allen and Jack Paar. He made the cover of Time magazine in 1960 and was profiled in The New Yorker.

A new generation of comedians, including Bill Cosby, George Carlin and the team of Mike Nichols and Elaine May, was inspired by Sahl. David Letterman continued the iconoclastic tradition, and more recently Jon Stewart, Stephen Colbert and John Oliver. Woody Allen would liken his work to the jazz of Charlie Parker and reviewers compared him to Will Rogers, who had tweaked politicians in a gentler manner.

“I don’t have the image of myself as a comedian,” Sahl himself said. “I never said I was one. I just sort of tell the truth and everybody breaks up along the way.”

But Sahl‘s comedy albums became best sellers. At the Academy Awards in 1959, he was co-host along with Bob Hope, Laurence Olivier, Jerry Lewis and others. Fearing he would seem to be joining the establishment, Sahl cracked: “We’ve just lost the college crowd; all across the country they’re yelling, ‘Sellout!’”

In the 1980s he frequently ridiculed his friend Reagan, but he said the president was never offended.

“If you’re his friend, it doesn’t matter if you’re an escaped con,” Sahl once said of Reagan. Democrats, he added, were often not as forgiving. In the 1990s, Sahl had fallen out of favor with them when he complained that President Bill Clinton’s only lasting legacy would be his affair with White House intern Monica Lewinsky.

“A lot of people I have met in the Democratic Party are extremely expedient,” he said. “Once it’s over, they don’t want to know you. Of course, that’s not generic to the Democrats.”

Sahl thought so highly of Kennedy, however, that he even wrote jokes for him on the campaign trail, including one which inspired JFK’s quip at his own expense — about a telegram from his wealthy father. “Don’t buy a single more vote than is necessary. I’ll be d—ed if I’m going to pay for a landslide.”

But when Kennedy was assassinated in 1963, Sahl was devastated and the tragedy foreshadowed a decline in the comedian’s fortunes that lasted for years. He quickly became convinced that Kennedy had been killed as part of a CIA plot and he accused the government of staging a massive cover-up. He devoted much of his monologues to reading long passages from the report by the government’s Warren Commission, which had been appointed to investigate the assassination. Audiences stopped laughing and his bookings plummeted.

Sahl also suffered a personal tragedy in 1996 when his only child, Morton Jr., died at age 19. Ten years later, the subject was so raw that mention of his son’s name could bring him to tears.

“My kid was like a more human version of me,” he once said.

Through the tough times, he continued to work the college circuit and small clubs. Although he never regained his former stature, he eventually returned to making a comfortable living with comedy. He continued to carry his newspaper on stage with him, although as the 21st century dawned he joked that he should probably have replaced it with a laptop.

It was a return to the academic life Sahl had known decades earlier when he earned a degree in urban planning from the University of Southern California in 1950.

Putting plans for graduate study on hold, he decided to make money writing jokes for comedians. He took to the stage himself, he once said, when he discovered the ones he was writing for were “too dumb” to get the material.

Morton Lyon Sahl was born on May 11, 1927, in Montreal, to a Canadian mother and a New York father who managed a tobacco shop. The family moved to the United States where Sahl’s father, Harry, worked for the Department of Justice in various cities.

After high school, Sahl joined the Air Force, spending 31 months at a remote Alaskan airfield where he edited the post newspaper, Poop from the Group. Discharged in 1947, he entered college. He took on a number of jobs before his girlfriend, Sue Berber, persuaded him to audition for the hungry i in 1953.

The couple married two years later but divorced in 1957. Sahl married his second wife, China Lee, in 1967. They also divorced.