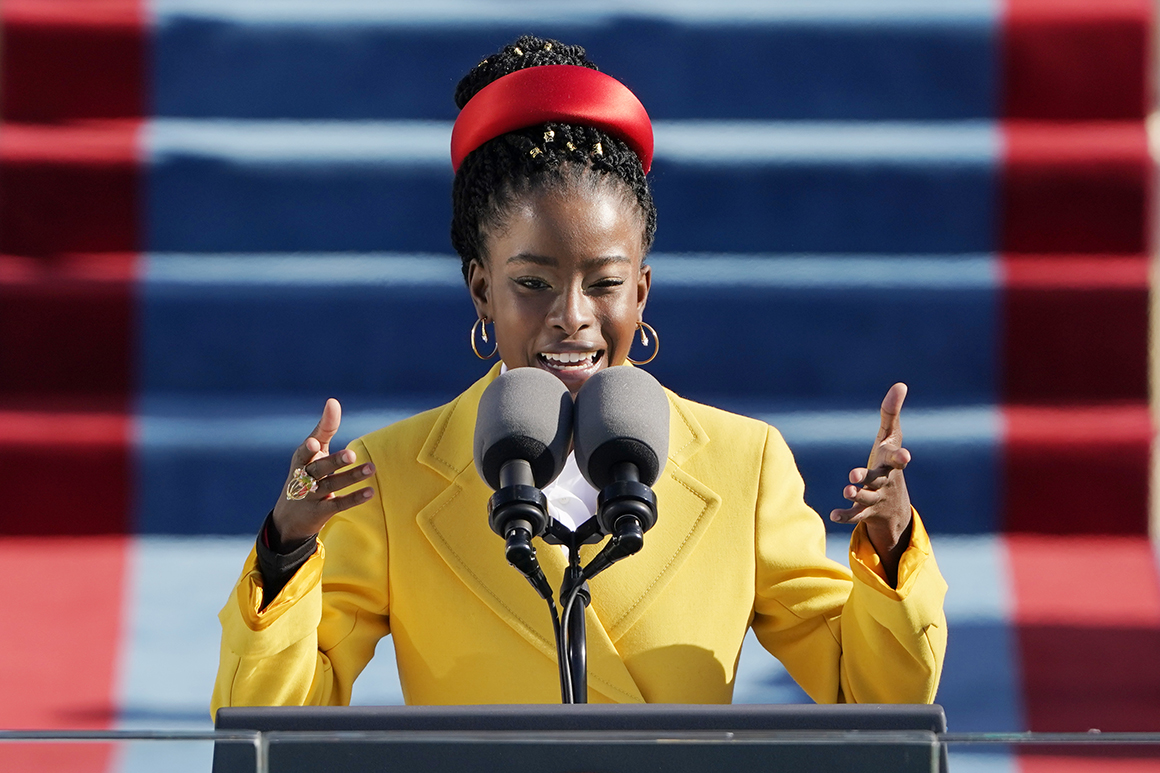 “A nation that isn’t broken, but simply unfinished.”

It captured the national mood, earning her instant respect and worldwide fame. But Gorman’s poetry, and its activist leanings, don’t spring out of a vacuum. Instead, she’s part of a continuum of writers, particularly performance poets of color, who’ve used poetry to inspire political action, relying on their art and their platforms to call attention to the issues of the day.

“Politics is the official business of trying to live together. And that is a very rich subject for poetry,” said Elizabeth Alexander, a former inaugural poet and president of the Mellon Foundation, the nation’s largest supporter of arts and humanities. “Poems envision what is ahead. Poems shed light so that we can see forward.”

Prior inaugural poets have issued similar calls for unity — but never at such a fraught time in American politics. When Maya Angelou read her poem, “On the Pulse of the Morning,” at Bill Clinton’s inauguration, she spoke of America’s colonial history and its disparate impact on Native Americans and African Americans, but urged other ethnic, religious and social groups to “put down roots … by the river,” and work together as one nation.

Activism has always been an integral part of Gorman’s life. In interviews, she’s talked about how her mother raised her and her siblings through a social justice lens. At her predominantly white, private high school, Gorman and her twin sister staged a revolt to protest the lack of diversity in their English class syllabus. As a teen, she was a U.N. delegate, and founded a nonprofit, One Pen, One Page, a platform for “for student storytellers to change the world.”

Writing poetry, she told the Harvard Crimson, is an inherently activist act. “The personal is political,” the Harvard graduate said. The fact that you have the luxury as a white male to write all your poems about being lost in the woods, that you don’t have to interrogate race and gender, is a political statement in and of itself.”

Gorman, the youngest poet laureate at 22, is part of a long line of performance poets of color who’ve wielded verse as a weapon in their activism: Gwendolyn Brooks. Nikki Giovanni. Amiri Baraka. Miguel Piñero. Alurista. Miguel Algarín, co-founder of New York’s Nuyorican Poets Cafe. Gil Scott-Heron married politics with poetry, setting everything to a humming beat. His contemporaries, The Last Poets, sprang out of the Black Arts and Black Power movements in the late 1960s and early 1970s, using drums to punctuate fiery, power-to-the-people poems. Along with Scott-Heron, they’re credited as the godfathers of rap. And today, Pulitzer Prize-winning rapper Kendrick Lamar, who incorporates spoken word in his music, is a muse for the Movement for Black Lives.

On Wednesday, Gorman carried that legacy with her. Standing at the podium in her red headband and caged bird ring, Gorman recited lines about the Jan. 6 insurrection that took place on the same steps where she spoke. It was a moment, she said in interviews, that shifted the focus of her poem and inspired her to deliver a message of unity while underlining the clear divisions in the country.

“We’ve seen a force that would shatter our nation, rather than share it. Would destroy our country if it meant delaying democracy,” she recited, referring to the Capitol riots. “And this effort nearly succeeded. But while democracy can be periodically delayed, it can never be permanently defeated.”

Her words reverberated across the inaugural stage and the nation and millions of people seized on her call for unity in a medium free of partisanship or lofty political rhetoric. Praise poured in: Morgan State University offered her a poet-in-residence position. Hillary Clinton endorsed her presidential aspirations. Both of Gorman’s upcoming books, which aren’t due to be released until September, are Amazon’s top selling, sitting at the site’s #1 and #2 slots.

More, the stakes and pressure of her writing a poem for the moment weren’t lost on other poets, including those more seasoned than Gorman. Jericho Brown, a Pulitzer Prize-winning poet and professor at Emory University, where he also serves as director of its creative writing program, said he and Gorman read at an event a few years ago. Seeing her recite at a younger age, Brown said, he knew her poetry career would flourish. The seamless infusion of politics into her poetry, he said, was both powerful — and par for the course.

“For me, politics is so important that it’s not important,” he said. “I think of politics to my poetry the same way I think of breath to my body. When I’m breathing, I don’t think about it. I do it because it needs to be done.”

“I’m of the school that thinks kinda everything is political if you look at it from the right angle,” they said. “I think about my art in a political sense but also that a lot of what I write responds back to the world, both in my own life and a broader sense.”

The widespread popularity of Gorman’s poetry, as evidenced by the millions of Twitter followers and book pre-orders she’s received, is also a reflection of its influence on mainstream conversation. Andrew Anabi, founder of Pool House, a New York-based poetry collective that posts inspirational poems on its website and social media, said Gorman’s words are emblematic of the role poetry can play in a time of widespread isolation. Poetry has so much value especially now, he explained, because it’s a “direct way to talk about difficult conversations.”

“In a world that is so fast paced, [poetry] can really stop you in your tracks,” Anabi said. “That can get people to pay attention.”