Selling the Narrative and Crushing Dissent for Fun and Profit

The U.S. has entered an extremely dangerous time, and the danger has nothing to do with
the Covid virus. Indeed, the danger long preceded the pandemic, which has served to
highlight how far down the road to ruin we have come.

The danger we are ill-prepared to deal with is the consolidation of the private-sector
media and its unification of content into one Approved Narrative which is for sale
to the highest bidders. This is the perfection of for-profit Totalitarianism
in which dissent is crushed, dissenters punished and billions of dollars are reaped in
managing the data and content flow of the one Approved Narrative.

So don’t post content containing the words (censored), (censored) or (censored), or you’ll
be banned, shadow-banned, demonetized, demonized and marginalized. Your voice will be
erased from public access via the Big Media platforms and you will effectively be disappeared
but without any visible mess or evidence–or recourse in the courts.

That’s the competitive advantage of for-profit Totalitarianism–no legal recourse
against the suppression of free speech and dissent. And if you’re shadow-banned as I was,
you won’t even know just how severely your free speech has been suppressed because the Big Tech
platforms are black boxes: no one outside the profit-maximizing corporation knows
what its algorithms and filters actually do or exactly what happens to the disappeared /
shadow-banned.

Shadow-banning is an invisible toxin to free speech: if you’re shadow-banned, you won’t even
know that the audience for your posts, tweets, etc. has plummeted to near-zero and others
can no longer retweet your content. You only see your post is online as usual, because this is
the whole point of shadow-banning: you assume your speech is still free even as its been
strangled to death by Big Tech black box platforms.

Since Andy Grove’s dictum only the paranoid survive is my Prime Directive, I’ve paid a bit
more to have access to server traffic data. So I can pinpoint precisely when I was shadow-banned:
my overall traffic fell off a cliff and the number of readers visiting from links on Big Tech platforms
fell from thousands to near-zero.

The new consolidated Big Media Totalitarians play an interesting game of circular sources:
in the traditional, now-obsolete / suppressed form of journalism, a reporter would be required to
identify a minimum of three different sources for the story, and make at least a desultory effort to
present two sides of the issue.

In other words, investigative journalism is nothing but a Potemkin Village of circular
sources conjured out of thin air by Big Media. Here’s an example from my own experience
of being shadow-banned.

1. A completely bogus organization pops up out of nowhere and doesn’t bother identifying its
owners, managers or sources.

2. This complete travesty of a mockery of a sham fabrication then issues a list of
websites which it claims, with zero evidence, are stooges / outlets of Russian propaganda.

3. With zero investigation of this slanderous, evidence-free “source,” the venerable Washington
Post (owned by Jeff Bezos) publishes an evidence-free hit piece glorifying this fabrication
on Page One.

4. The other Big Media giants then amplify the bogus slander because it came from
a “legitimate source,” the Washington Post.

Do you understand how circular sourcing works now? Once a flagrantly bogus bit
of propaganda is embraced by one Big Media giant as part of the Approved Narrative,
then every other Big Media / Big Tech corporation promotes the fabrication as “real news”
even as it is obviously the acme of “fake news”, a complete fabrication.

The fake “source” was called PropOrNot, and the list included dozens of well-respected independent
websites, all slandered with a completely fake accusation for one reason: each site had
published some content that cast a skeptical eye on the crowning of Hillary Clinton in 2016 and the
crushing of Bernie Sanders’ campaign by Big Media’s Approved Narrative.

As long as you post videos of kittens and kids dancing, you’re OK because your content (owned
and controlled by the platform you posted it on–read the terms of Service) is free
to the platforms and they use your content to “engage” users which generates billions in
profits.

But if you question the Approved Narrative, you put a big day-glo target on your back.
Now if you’re a multi-millionaire, you know, a top 0.1% per-center, you can afford to keep posting
dissenting views even after you’ve been demonetized and your income falls to near-zero.

The rest of us aren’t quite so privileged. This is another of the toxic elements in
Big Media / Big Tech’s consolidated control of what was once known as free speech:
They don’t have to ban your content outright, which might cause a few ripples of tame protest;
all they have to do is starve you into submission by strangling your source of income.

Thanks to watertight terms of service, even a multi-millionaire is legally powerless
against the USSA’s Big Media Totalitarian regime. By posting content, you already gave away
all your rights. So you can go solo and post content on some obscure corner of the web that no
one knows exist, but that’s the functional equivalent of being banned and demonetized.

So go right ahead and enter a sound-proof box and scream your head off; nobody can hear you.
Welcome to the totally privately owned, legally untouchable Big Tech / Big Media Totalitarian
regime that will let you know what’s in the Approved Narrative because that’s all you’ll
allowed to see.

Gordon Long and I cover these topics and many more in our latest video
Buying the Narrative (35:41)
Since I’d like the video to actually be viewed more than 11 times, I avoided using the terms
(censored), (censored) or (censored), and that’s the final fatal poison delivered by our
profit-maximizing Big Tech / Big Media Totalitarian regime: self censorship. You know
what you can’t say, so don’t say it. Stick with the kitten videos and you’ll be just fine.

It’s all fun and games until the pendulum of Totalitarian Consolidation and its Approved Narrative
reaches an extreme (like, say, right now) and the pendulum swings back to an equal extreme
at the other end of the spectrum. Keep in mind that hubris and money are no match for history:
the more powerful you claim to be, the greater your fall. The way of the Tao is reversal. 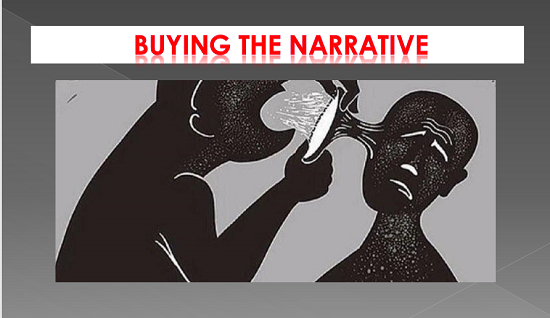 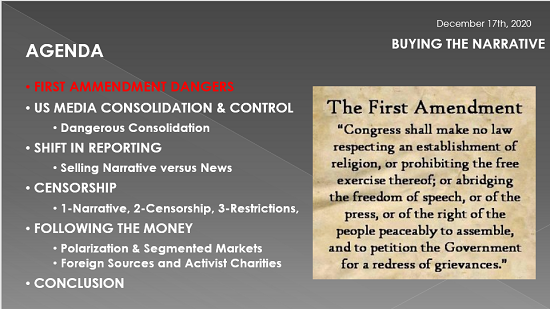 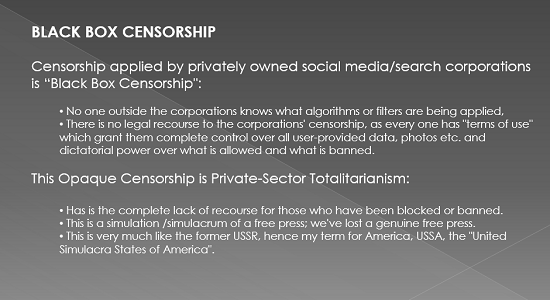 Become
a $1/month patron of my work via patreon.com.