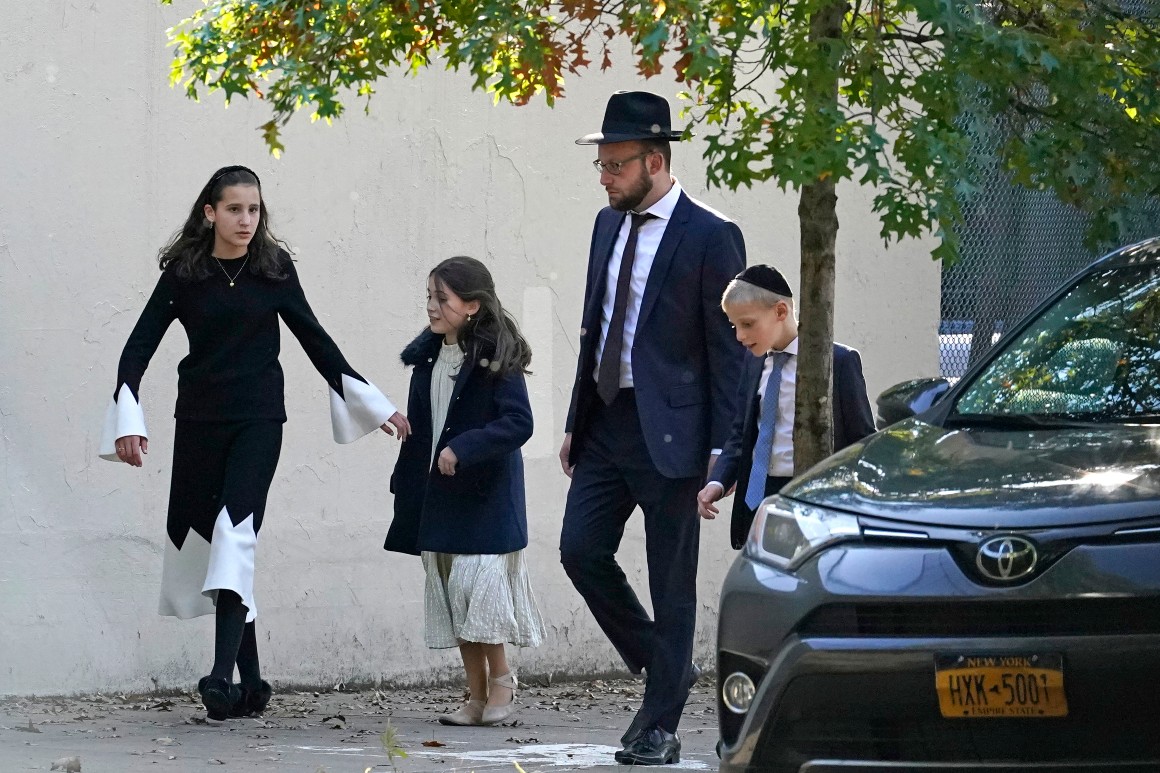 “There’s a place for peaceful protest, but the NYPD will not tolerate people doing harm to others. There will be no tolerance for assaults, for damage to property, for setting fires,” de Blasio said at a press briefing Wednesday. “Anything like that is unacceptable.”

The mayor proposed shutdowns in nine zip codes that are home to clusters, but Cuomo opted for a plan that will impose escalating restrictions in three color-coded zones.

“We need to stop this outbreak dead in its tracks for the good of all of New York City. Remember, we need to do it to save lives,” de Blasio said.

In the worst problem areas, houses of worship will only be allowed to let in ten people at a time. All nonessential businesses must close, and restaurants can only be open for takeout. All mass gatherings are prohibited, and public and private schools are closed.

Orthodox leaders quickly lashed out at the new restrictions.

“What occurred today can only be described as a duplicitous bait-and-switch,” they said, charging that the governor’s “rhetoric in recent days has been irresponsible and pejorative, particularly to a community of Holocaust survivors and their descendants, for whom his language was reminiscent of past verbal attacks on Jewish communities.”

Leaders are encouraging open defiance of the new rules, with the four politicians insisting community members would exercise their right to worship without government interference. Yeger urged on a group of protesters in a video posted by Boro Park News. “I don’t care who in government thinks that they can stop us. They’re wrong. Let them try,” he said.

The outrage began shortly after Cuomo announced the restrictions Tuesday, following a conversation with Orthodox leaders he said he “felt very good” about.

Agudath Israel of America, a prominent Orthodox Jewish organization, said the talk “was largely a one-way monologue,” according to a statement from Tuesday evening.

Rabbi Yeruchim Silber, director of New York government relations for the group, was not on the call, but told POLITICO his colleagues said the governor made no mention of reducing synagogue capacity from 50 percent to 10 people. The organization plans to file a preliminary injunction against the state “to undo this deeply offensive action,” according to an email from the organization.

Schools will also close in designated orange zones surrounding the worst clusters, as will higher-risk businesses like gyms. Restaurants can offer outdoor but not indoor dining, and houses of worship are limited to 25 people immediately outside the red zones.

In yellow zones, schools will stay open but do weekly, random testing for Covid-19. Gatherings are limited to 25 people.

Cuomo, during a short press call Wednesday morning, acknowledged the new restrictions are “difficult” and — like initial pushback to stay home orders imposed across the state and country this spring — represent a “dramatic shift for society.” But he said he is confident in the plan.

“There were protests almost every day [this spring], so none of this is easy, but there are also facts, at the end of the day,” Cuomo said. “These clusters are all done by case data. There is nothing arbitrary about this.”

Citywide, there were 512 new cases of Covid-19 reported Wednesday, a number that has been steadily rising in recent days. The positive test rate was 1.39 percent, whereas cluster areas have seen rates above 3 percent for more than a week straight.

Cuomo, when asked, did not indicate what action he believes should be taken to prevent violence from escalating should opposition continue.

Orthodox leaders and others say the city and state should have done more more to prepare the community ahead of the Jewish High Holidays that began last month — though there has been no shortage of daily public health warnings by the governor and mayor.

Silber said Jewish leaders who have seen the outbreak ravage their communities have been advocating for testing, hand hygiene, social distancing and mask wearing. But he said Covid-19 transmission was largely abated over the past few months, lulling some into a false sense of security.

“There really was a quiet period of three months and a sense of complacency did set in. … It kind of hit, and it took a new mindset to educate people that this is serious. There is a second wave,” Silber said. “When people feel they are being targeted, that is very difficult.”

Houses of worship and other entities that host illegal gatherings may face fines of up to $15,000, under the state orders. The city has yet to fine anyone for not wearing a a mask despite large crowds in recent weeks not wearing any face coverings.

Public Advocate Jumaane Williams, who hails from Brooklyn, also said the city did not communicate enough with Orthodox leaders and residents.

“We cannot not communicate with communities, especially communities we know who tend to be a little bit more insular,” he said, also criticizing the timing of the shutdown. “We should not have ignored that and we should have worked with that.”

But he said that community leaders are also responsible for ensuring individuals adhere to public health guidelines, and pointed to comparisons with Black Lives Matter marches where many were concerned about risk but ultimately saw high percentages of people wearing masks.

Williams, a frequent critic of the mayor and governor, said Cuomo’s plan was a slight improvement over the mayor’s, proposed Sunday.

“There are some problems because we still see lines cutting through blocks,” he said. “That doesn’t make any sense.”

The city will be working to notify businesses in the affected areas that must shut down or adapt to new restrictions. Individuals can be fined up to $1,000 for failure to wear a mask or practice social distancing, though the city still has not disclosed how many face covering fines have been given.

While the state has released maps of the zones, they in some cases cut through the middle of blocks, and precise address-by-address information has yet to be released.

Despite the vows of defiance, de Blasio said he believes faith leaders will follow the rules. If they don’t, he said the city is prepared to shut down houses of worship. “I think you’ll see, overwhelmingly, adherence to these rules,” he said.

The shutdowns will last for at least two weeks, but could go longer if the spread of Covid-19 is not contained.

“Certainly there will be sacrifice, and I feel for anyone in the communities affected whose livelihood is going to be put on hold. That’s a huge problem,” de Blasio said. “The faster we address this challenge, the shorter the shutdown will be.”