‘We’re going to get it done’: Governors mobilize to fill Trump’s testing gap 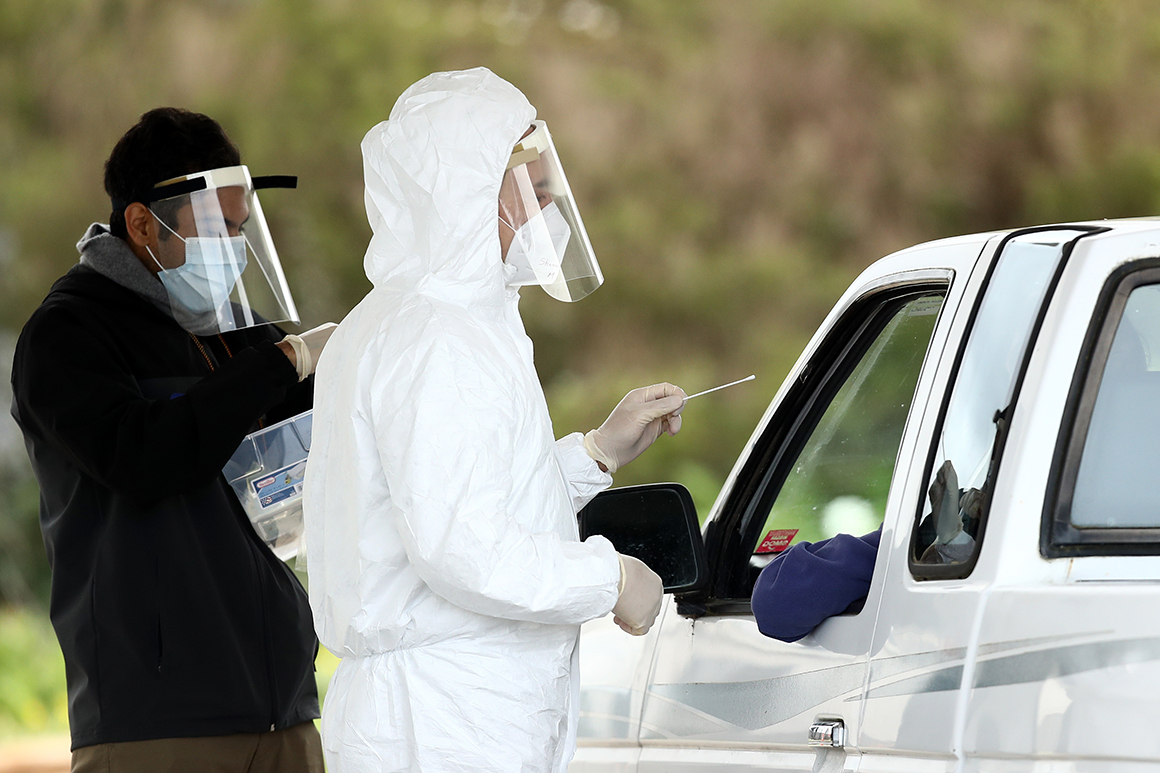 Two weeks ago, while struggling to reopen schools and drive down infection rates without a national effort to improve and coordinate access to testing, Hogan pulled together six state leaders to take a drastic step: Try to build one on their own.

The coalition struck an immediate chord among governors, with so many states eager to join that Hogan paused enrollment at 10 out of fear that it would be unable to obtain enough tests. Now, the group is nearing an agreement to purchase 5 million rapid coronavirus tests, in a first-of-its-kind deal designed to slash testing turnaround times and fortify their states ahead of a potentially vicious Covid-19 resurgence in the fall.

The fact that the states include places as geographically and politically disparate as Arkansas, Utah and Ohio suggests this is less an expression of federalism — the different needs of different places — than an urgent effort to meet a persistent and universal need.

The coalition — made up of five Democrat-led states and five helmed by GOP governors — now plans to secure 500,000 tests per state from a pair of U.S. manufacturers as soon as this week, with the possibility of expanding later in the fall to include additional states that have already sought to join.

On its own, the purchase won’t immediately fix a vast testing shortfall that has hindered the nation’s pandemic response for months. But its architects hope it will create a new, more reliable pipeline for crucial supplies wholly separate from the federal government yet large enough to grab the attention of private manufacturers.

The White House for months has resisted appeals from states and public health experts to organize a nationwide testing operation to ramp up manufacturing of test kits and supplies and coordinate their distribution, as outbreaks swept first across the Northeast and then into the South and West.

Instead, it put states in charge of managing their testing needs as early as April, with the administration opting to play a backup role. The result has been a patchwork marked by testing deserts, lengthy backlogs and an overall testing infrastructure that’s far too small to track the virus’ spread — much less bring it under control.

Public health experts estimate that the nation needs to be running as many as 30 million tests per week to be able to turn the tide of the pandemic. Of late, the U.S. has conducted roughly 5 million per week. In many hard-hit areas, it can take several days for people to receive the results of their tests, rendering them all but useless in efforts to quickly isolate infected Americans and trace their contacts.

There is even less access to the rapid antigen tests that Hogan and his interstate compact are targeting, which generate results in as little as 15 minutes but are currently manufactured by only two FDA-approved companies: Quidel and BD.

A Trump administration effort to supply antigen tests to every long-term care facility in the country is expected to take months to complete. And while the federal government is investing in a handful of new companies with plans to improve capacity into next year, the White House has exasperated health officials by refusing to invoke the Defense Production Act to seize manufacturing capacity and force a broad scale-up of test production similar to prior moves to accelerate ventilator construction. It has also refrained from pouring federal funds into testing at the same aggressive rate as it’s done in pursuit of a coronavirus vaccine.

“The demand for these tests is not going to go away,” said Andrew Sweet, the Covid-19 response and recovery managing director for the Rockefeller Foundation, which is helping coordinate the compact’s work. “If we’re talking about kids going back to school, there really needs to be a way to test them at a massive scale.”

White House spokesperson Judd Deere disputed the notion that the country has a testing problem, calling the U.S. “the best testing ecosystem in the world.”

The U.S., he continued, “has now completed more than 70 million tests — thanks in large part to the administration’s prioritization of testing resources and technical assistance to every state in the nation to ensure we are testing the right people at the appropriate time.”

In a statement, HHS spokesperson Mia Heck argued that the Trump administration’s approach to testing “enabled this state compact to happen, as it should be each state’s priority to implement point-of-care testing.”

Hogan, until recently the head of the National Governor’s Association, had periodically floated forming a coalition with other state leaders as the pandemic spiraled through the spring and summer, and testing supplies grew scarce.

But the idea didn’t gain momentum until the Trump administration in mid-July threatened to slash funding for testing, going as far as to lobby Senate Republicans to zero out the $25 billion in grants included in a coronavirus aid proposal.

The president had already repeatedly suggested that the country was doing too much testing, arguing it was making his administration look bad. And the prospect of ongoing federal resistance — which came amid a separate White House push to fully reopen schools in the fall — panicked state officials seeking to beat back a Covid-19 resurgence that would soon begin killing more than 1,000 Americans a day.

With the deep-pocketed Rockefeller Foundation enlisted as a neutral organizer and financial guarantor, Hogan put together the six-state compact in less than a week, which included Virginia, Massachusetts, Ohio, Michigan and Louisiana. Within days of its official announcement, four more states — North Carolina, Rhode Island, Utah and Arkansas — jumped aboard before the group closed off initial membership for fear it might not be able to buy so many tests at once.

States formed similar consortiums earlier in the pandemic aimed at finding and purchasing personal protective equipment, to middling results. But officials say they’re more optimistic about the testing compact for a key reason: Unlike with PPE, which required sourcing all manner of gloves, gowns and masks from various, sometimes unreliable suppliers, the testing compact is seeking a single product from two established U.S. manufacturers.

All the states need to do is convince those companies that they’ll be a major customer for months to come.

“The main motivation is to send a signal to the manufacturers that there is demand,” said one Utah official, who also described the bulk ordering as a way for states to jump in front of competing buyers without having to pay exorbitant prices. “We want all the tests we can get.”

The latest news in health care politics and policy.

The governors are still working out what to do with them when they arrive. While the Rockefeller Foundation is developing guidelines for how to deploy the tests, the distribution decisions will be largely left up to each state’s own officials. Several governors have laid out tentative plans to strategically allocate the tests to nursing homes, schools and other settings that require essential workers to be in close quarters, rather than make them initially available to the general public.

Unlike diagnostic tests that can take more than a day to return results, the antigen tests would be used as a screening measure, allowing quick surveying of large groups in an effort to identify asymptomatic people and prevent them from unwittingly seeding an outbreak. That could lower the odds of health care workers bringing the virus into long-term care facilities, allow reopened schools to isolate sick kids before they reach the classroom or aid the gradual return of workers to office settings.

“Over time, the plan is for every nursing home to get one of these tests,” Louisiana Gov. John Bel Edwards, a Democrat, said soon after the compact’s initial announcement, taking a shot at Trump in the process. “Because contrary to what some people believe, testing doesn’t create a case. There’s a case out there or not, but testing gives you an opportunity to know where the cases are.”

Even so, there is still little expectation that the coalition alone will be able to curb the virus’ large-scale spread. Manufacturers BD and Quidel have already warned that demand is outstripping their supplies. And even with the 10 states getting priority treatment, the tests are expected to be delivered on a rolling basis as they are produced.

There also remains the possibility that the Trump administration will step in to commandeer the antigen tests for their own initiatives, similar to how it undercut states in the scramble for medical supplies and protective equipment early on in the crisis.

“The administration made it very clear that states were on their own,” Hogan said of the testing push, while acknowledging that the last time he circumvented the federal process to import 500,000 tests from South Korea, Trump lashed out at him publicly. “We don’t think the federal government should be competing against us.”

Heck, the HHS spokesperson, deemed the administration’s initiative to supply all long-term care facilities with rapid tests the “highest priority,” and suggested that it would be willing to invoke the Defense Production Act if necessary to ensure that the facilities get the tests they need.

But state leaders and public health experts have long maintained that the administration’s position has been inconsistent and often unhelpful, with the Trump administration pursuing a series of its own projects while resisting calls to coordinate a more universal response.

State leaders and health officials have wondered openly why the federal government is so skeptical of spending more on detecting Covid-19, even as it pours billions of dollars into a range of vaccine candidates with little assurance that any of them will successfully inoculate against the virus. And with no comprehensive federal plan for navigating the fall and winter any differently than the preceding months, health officials worry the nation could remain paralyzed by the pandemic for at least the next year absent major investments in a testing infrastructure that allows people to screen themselves more quickly and frequently.

“This is the quintessential public good for which you need to have a federal solution,” said Laurence Kotlikoff, a Boston University economics professor who has advocated for approving and distributing rapid in-home tests to every American, adding that states can only make minor headway on their own. “It’s like in World War II finding out the Germans were developing an atomic bomb and having the states all create their own Manhattan Projects. It’s equally stupid.”

Yet six months into the pandemic, that view hasn’t gained traction inside the administration, with testing czar Brett Giroir recently venting instead that he’s “really tired of hearing” criticism of the administration’s efforts.

“Everything that can possibly be done has been done,” Giroir said during a Friday appearance on CNN.

Hogan, too, alluded to growing exhaustion among state leaders — but in their case, with the Trump administration’s unwillingness to mount a comprehensive response.

“It’s something the federal government could have taken the lead on — but they didn’t,” Hogan said. “Instead of arguing the point, we’re just going to do what we’re going to do.”