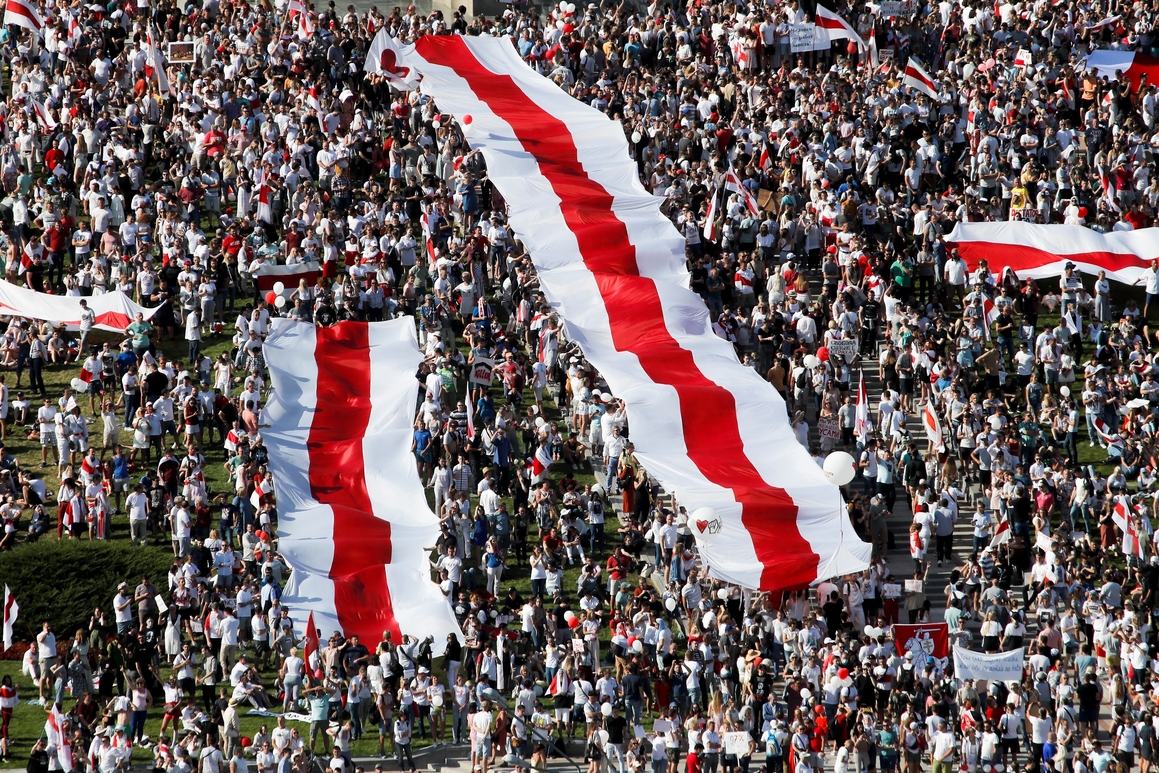 “They say elections results were forged. But how can 80 percent be forged? They want us to hold new elections. But how will we work in the fields if we must have new elections?” he said.

He also warned his supporters about the danger to the country from NATO forces. “Tanks and planes are taking off 15 minutes from our borders … There is a buildup of military power on the western borders,” said Lukashenko, dressed in a white short-sleeve shirt, pausing frequently to mop his brow.

“Do not ruin Lukashenka — ruin the first president, this will be the beginning of your end … You will be beggars, you will walk with an outstretched hand and ask for a piece of bread,” Lukashenko warned.

His supporters then marched away, many of them carrying the country’s official green and red banner — based on its old Soviet flag — while chanting: “We won’t give Belarus away” and denouncing opposition protesters as “political prostitutes.”

Just ahead of his speech, Lukashenko phoned Russian President Vladimir Putin — his second call to the Kremlin in as many days.

Putin, who was one of the first leaders to congratulate Lukashenko after the election, is a crucial factor in what happens in Belarus. The country of 9.5 million is in a loose political union with Russia, hosts some Russian troops, and depends on Russian economic help.

Lukashenko has called on Russia and on the Russian-led Collective Security Treaty Organization, a grouping of ex-Soviet republics, to help.

“The discussion of the situation in Belarus after the presidential elections was continued, including taking into account external pressure exerted on the republic. The Russian side reaffirmed its readiness to provide the necessary assistance in resolving the problems,” said a Russian statement issued after their conversation.

The mood was very different at the huge opposition rally that drew as many as 200,000 people waving the white-red-white flag of the opposition in central Minsk and chanting for Lukashenko to quit; similar gatherings were held in cities across the country. The tut.by website estimated the turnout for Lukashenko’s rally at between 14,000 and 31,000; the official tally was 70,000.

Pavel, 32, held up a poster reading “Tribunal” in large letters, calling for Lukashenko and his backers to be prosecuted for the violence of the crackdown.

“We have an article on crimes against human security in our criminal code. It covers torture, abduction, beatings, threats to health and life,” he said, adding: “Even if one of these people should run away from our country to Russia, Europe or anywhere else, they will be punished in 10, 20, 30 years.”

Police did not interfere with the protest.

Sunday’s rally is a show of force for the opposition, which has no strong leadership after opposition presidential candidate Svetlana Tikhanovskaya fled to neighboring Lithuania. Despite the lack of organization, the rally was orderly and peaceful.

The movement against Lukashenko has gathered speed over the course of the week, beginning with smaller protests that were brutally put down by police. More than 7,000 were arrested and at least two people were killed. By Friday, workers at some of the country’s largest state-owned companies had joined the demonstrations.

Artem, a 32-year-old IT specialist taking part in the opposition rally, said the factory strikes have “greatly shaken [the position of the authorities] and given hope to the entire country. If even this part of the electorate is against him, chances are very high the situation will turn.”

There are also signs that parts of the government bureaucracy and security forces are beginning to waver in their support of Lukashenko, who has been in power since 1994.

On Sunday, Belarusian ambassador to Slovakia, Igor Leshchenya, declared solidarity with protesters. Some soldiers and policemen have filmed themselves throwing their uniforms into the trash, saying they can no longer support the regime.