Replace the Alexander Hamilton Stephens Statue With One of John Lewis 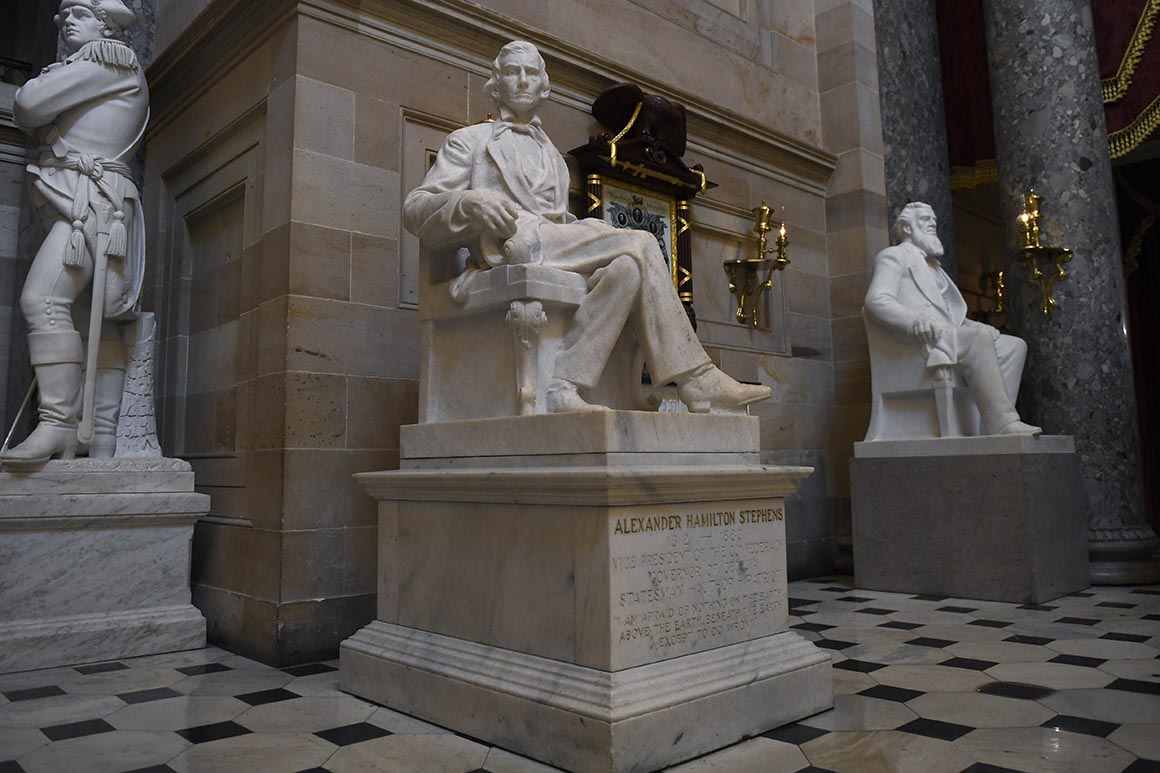 Like Lewis, Stephens was also a Georgia legislator. Elected in 1843 as a Whig, he gradually began voting with Democrats in the following decades. He was elected as a delegate to the Georgia Secession Convention, established as a response to the election of Abraham Lincoln, in 1861. That same year, he was chosen by the Congress of the Confederacy to be the vice president of the provisional government.

Stephens delivered a speech that remains maybe the clearest distillation of white supremacy ever uttered not long before the first shots of the Civil War were fired at Fort Sumter in Charleston, South Carolina, in 1861. He argued in the now-infamous “Cornerstone” speech that the founders had it wrong; that there was no real tension between liberty and race-based chattel slavery if science and God’s purpose were properly understood. “Many governments have been founded upon the principle of the subordination and serfdom of certain classes of the same race; such were and are in violation of the laws of nature. Our system commits no such violation of nature’s laws. With us, all of the white race, however high or low, rich or poor, are equal in the eye of the law. Not so with the negro. Subordination is his place. He, by nature, or by the curse against Canaan, is fitted for that condition which he occupies in our system,” Stephens thundered during the now-infamous speech.

He said the “cornerstone” of the Confederate States of America, whose constitution established permanent black enslavement, rested “upon the great truth that the negro is not equal to the white man; that slavery subordination to the superior race is his natural and normal condition. This, our new government, is the first, in the history of the world, based upon this great physical, philosophical, and moral truth. … It is upon this, as I have stated, our social fabric is firmly planted.”

He was making explicit what Thomas Jefferson, George Washington and others had made implicit about eight decades earlier in the United States Constitution, which had a number of clauses that protected the interests of slave owners.

No matter. The Architect of the Capitol, the agency in charge of landmark buildings in Washington, D.C., describes Stephens as “a dedicated statesman, an effective leader, and a powerful orator, always seeking moderation and peace,” a white-washed story of an overt racist that is all too typical in American history. This denial is what made it possible for a man like Donald Trump to become president despite his numerous faults and lack of political experience and unlikely for a man like Lewis to make it to the White House despite his outsized role in helping perfect this nation.

That’s why he’s the kind of American we long should have been building monuments and memorials to. And we wouldn’t even have had to downplay or ignore his participation in great evils by saying he was just “a man of his time”—because he was too busy building a new era. He fought for racial equality for Black people and Native Americans and those in the LBGTQ community and everyone else he found on the wrong side of disparities and discrimination.

Though I only met him once, I suspect Lewis would be telling us that instead of replacing the Stephens statue with one to him, he’d rather see the Voting Rights Act restored; that he’d want us to not forget about the injustice inflicted upon Taylor, her family and community and the importance of making a reality significant, long-lasting policing reforms; that while symbols are powerful and must be grappled with, he wouldn’t want us to settle for such gestures. (He supported removal of the Stephens bust but not in favor of renaming the Pettus bridge, saying that such a change would “compromise the historical integrity of the voting rights movement.”) He’d warn us to never forget what his friend Martin Luther King Jr. said, that injustice anywhere is a threat to justice everywhere.

This country has seldom deserved the kindness, courage and compassion of men like Lewis, who never allowed their righteous anger to become a burning bitterness. Replacing a statue, compared to the sacrifices Lewis made, is easy work, but it shows a commitment to finishing his work and leaving our old idols behind. It’s the least we owe him.