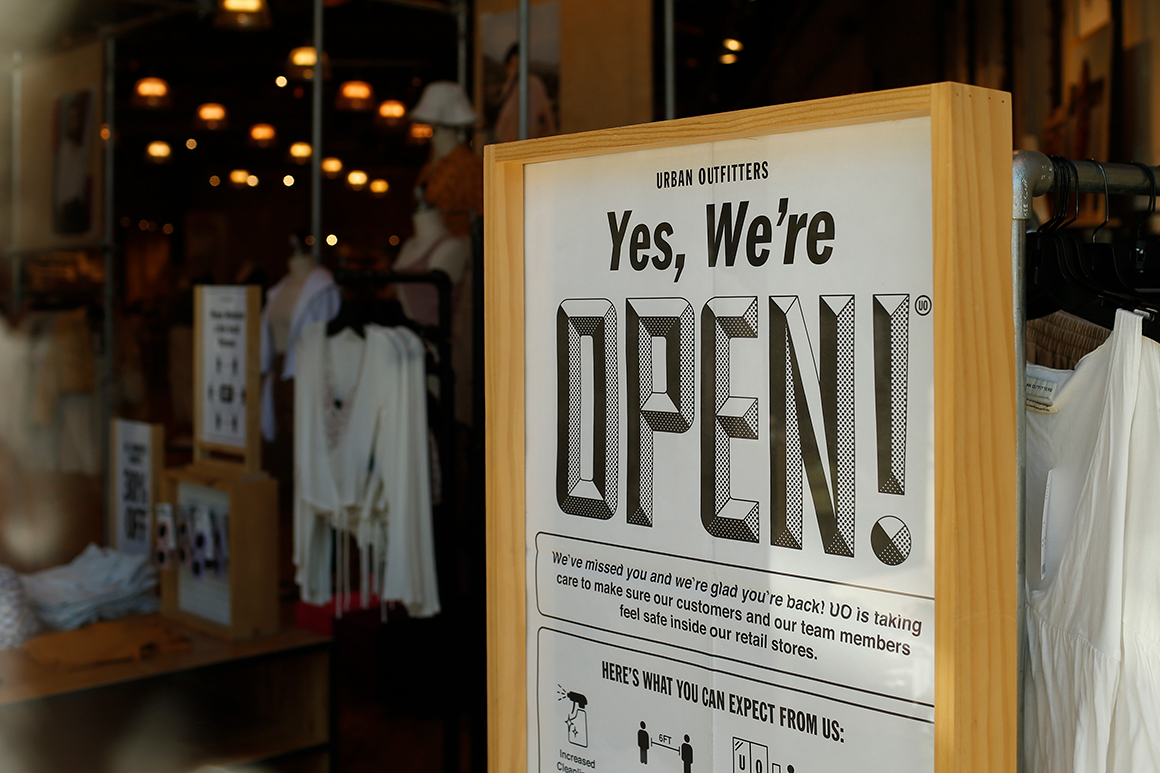 Stephen Moore, co-founder of the Committee to Unleash Prosperity and a member of President Donald Trump’s council to reopen the country, noted that while the report is “not a partisan study whatsoever,” it’s “striking” that traditionally red states have been reopening sooner than traditionally blue states.

“Our analysis shows quite clearly that the states that open up the soonest and the safest — and Iowa and Oklahoma and Georgia are three examples of states that are doing that — will have much swifter and stronger recovery than states that stay closed,” Moore said. “The major reason for that is because businesses cannot go another month without revenue. … If they stay closed for another month, month and a half, you’re gonna have body bags of businesses that will never recover.”

The White House’s guidelines for states to begin reopening include a downward trajectory of cases over a 14-day period, hospital capacity that can treat all patients without crisis care and a robust testing program.

But even as they ease restrictions to allow more businesses to open and people to leave their homes, the governors stressed that the virus is still a threat and that Americans must be responsible to keep people safe while states prepare for a possible second wave in the fall.

“The reality is we can’t stop the coronavirus,” Reynolds said. “It’s going to remain in our communities until we have a vaccine available. So we have to learn to live with it without letting it govern our life.”

The coronavirus has already infected more than 1.1 million people in the U.S., and 67,000 Americans have died. Tens of millions more have been laid off and filed unemployment claims over the past six weeks as nonessential businesses across the nation shuttered to slow the spread of the virus.

In recent weeks, Trump has been encouraging governors to end the lockdowns in their states, and he and Vice President Mike Pence reportedly approved of Georgia’s move to reopen businesses, in private.

But publicly, the president told reporters last month that he “strongly” disagreed with Kemp and “wasn’t at all happy” with the governor’s decision to allow businesses like spas, hair salons and tattoo parlors to open right away. The spat, however, didn’t come up Monday.

Kemp did note that barbershops and salons have had a one-person-in, one-person-out policy, with patrons waiting in their cars until it’s safe to go inside. He also acknowledged that Georgians who are uncomfortable going out should stay home, and encouraged residents to do their homework to ensure any establishment they consider visiting can keep them safe.

“Our message to our citizens right now is we can’t let our guard down,” Kemp said. “This virus is still out there. We gotta continue to stop the spread and make sure it’s manageable for our health care system. So we’re encouraging people, when they’re going to public places … to wear your masks at all times when possible and just continue to just wash your hands and just be careful on what you’re doing.”

“These things are working,” he continued, “and we’ve got to continue to do that until we have a cure or some medication.”

Schools in Iowa and Oklahoma are closed for the remainder of the academic year, but Reynolds said she’s hopeful that summer school and remediation can begin next month in Iowa. Oklahoma is considering starting schools two weeks early to test students’ abilities after so much time off.

Stitt said the state is planning to authorize sports activities on May 15 and allow summer camps and football programs to begin on June 1. But it’s too soon to tell whether football fans will see the University of Oklahoma Sooners or Oklahoma State Cowboys play this fall, he said.

“I have not spoken to the NCAA. I know that both the University of Oklahoma and Oklahoma State would like to do that,” Stitt said. “I think America would love to see a college football season. How that plays out with fans or social distancing, I think it’s still too early to tell. But I would certainly hope so. We need to get back to some type of normalcy.”