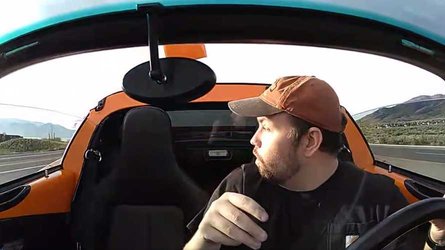 We never knew the Lotus Elise had the fastest roof-opening mechanism of all convertibles. All jokes aside, the owner of a Series 2 is causing quite the stir on the WatchPeopleDieInside sub-forums on Reddit with his video showing the British sports car going from coupe to convertible in the blink of an eye. To the delight of redditors, it was all caught on camera by what the car’s owner says is an Owlcam, which records both ways.

So, what exactly happened? As the Elise started to pick up speed (about 65 mph according to the owner), the roof’s front latch snapped off, which ultimately caused the rear latches to fail as well, thus sending the top up in the sky. As the car’s owner explains the odd incident, the top flew over three cars that were behind his Lotus, without hitting any of them.

It ultimately ended up on the bike lane without causing any damages, and while the owner managed to recover the roof, he says it’s banged up and will have…