Market sentiment remained largely supported due to the easing “stay at home” measures. In the currency world, the was among the main gainers following Australia’s better-than-expected CPIs. As for today, the spotlight is likely to turn to the and the 1st estimate of the US for Q1.

The dollar traded lower against all the other G10 currencies on Tuesday and during the Asian morning Wednesday. It lost the most ground against SEK, NZD, NOK and AUD in that order, while it underperformed the least versus JPY, GBP, CHF and EUR. 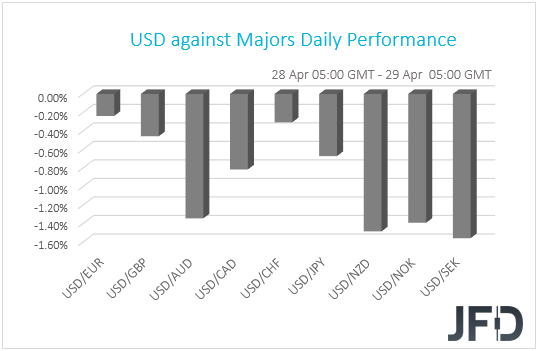 The weakening of the dollar and the strengthening of the commodity-linked currencies suggest that risk appetite may have remained supported for another day. Indeed, major EU indices were a sea of green, aided by a rally in banking shares following a 40% jump in UBS’s Q1 earnings and a 4.2% in Spain’s Santander (MC:). It seems that expectations have fallen so much due to…