Major EU and U.S. indices continued trading in the green yesterday, but Asian bourses traded mixed today, as the reported numbers of new infected cases and deaths worldwide revealed an acceleration again. As for today, apart from headlines surrounding the virus saga, investors may also pay attention to the BoC decision. Tonight, the most important release may be Australia’s report for March.

The traded mixed against the other G10 currencies on Tuesday and during the Asian morning Wednesday. It gained against NZD, NOK, AUD and CAD in that order, while it underperformed versus JPY, CHF, GBP, and EUR. The greenback was found virtually unchanged against SEK. 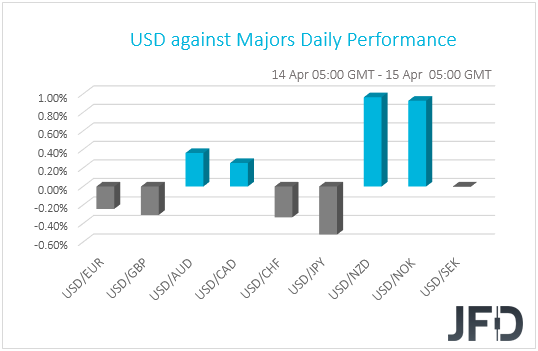 The weakening of the risk-linked and , as well as the slide in the oil-related CAD and NOK, combined with the strengthening of the safe havens yen and franc, suggest that risk appetite eased at some point. Indeed, although major EU and US indices…