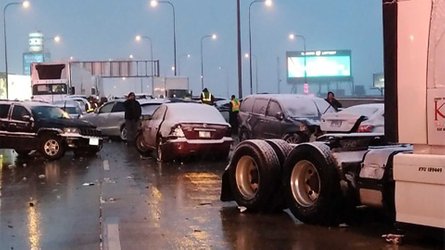 A nearly 60-car pileup snarled a Chicago freeway Wednesday morning as a freak mid-April snowstorm swept through the region. The unexpected snowfall made road conditions slick, with the first reports of the pileup coming shortly after 5 a.m., according to Block Club Chicago. The chain reaction had the Chicago Fire Department respond with its Mass Casualty Unit and 12 ambulances.

Fourteen people were taken to area hospitals with undisclosed injuries. There’s no word on their conditions; however, none of the injuries were life-threatening, and there’ve been no reported deaths, either. The pileup happened on the Kennedy Expressway at North Avenue. The crash closed the expressway for several hours, with one inbound local lane open around 8:45 a.m. Inbound express lanes were also open around that time.

Photos from the scene show cars and semi-trucks littered across the highway with bumpers askew and doors dinged and battered. The video embedded…