Markets Trade In “Risk On” Fashion As Virus Spread Slows

Global equities traded well in the green on Monday as both infected cases and deaths due to the coronavirus slowed down on Sunday. In the FX world, the risk-linked currencies and were among the main gainers, with the former getting an extra boost from the less-dovish-than-expected RBA, while the safe havens dollar, yen and franc traded on the back foot.

The dollar traded lower against the majority of the other G10 currencies on Monday and during the Asian morning Tuesday. It lost the most ground versus NOK, AUD and NZD in that order, while it underperformed the least against GBP and JPY. The greenback was found virtually unchanged against CHF and EUR. 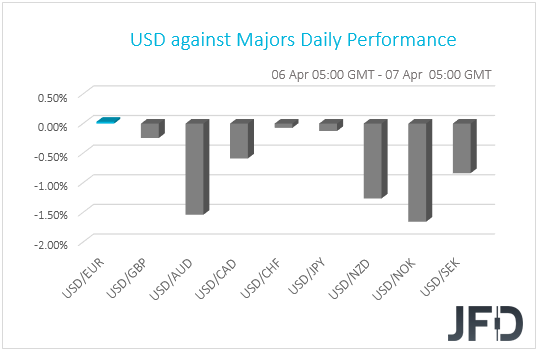 The strengthening of the risk-linked currencies Aussie and Kiwi, combined with the weakness of the dollar, the yen and the franc, suggests that market participants traded in a risk-on manner yesterday. Indeed, major EU indices closed in green…