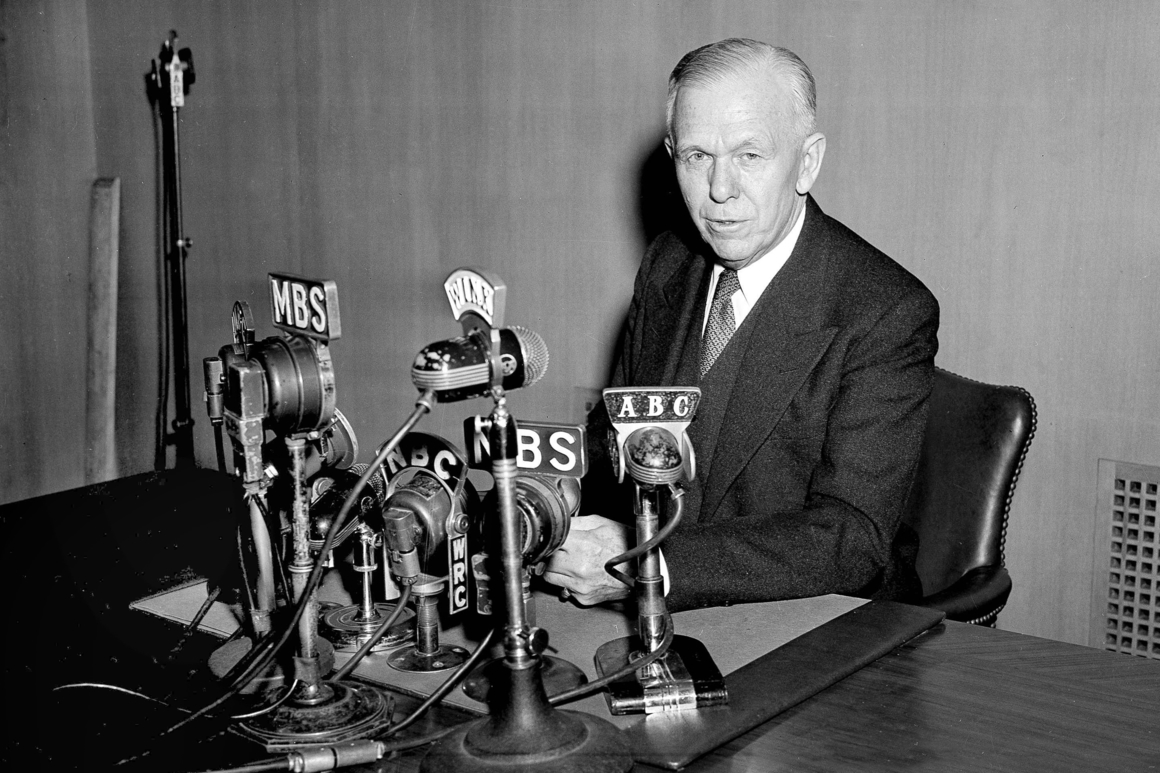 For one thing, the cash for any new “Marshall Plan” would have to come from European governments themselves. For another, the EU budget is much smaller as a proportion of the European economy than the post-war aid provided by the United States. And the bulk of EU budget funds are allocated to existing programs, such as agricultural subsidies and regional development spending.

To turn the EU’s Multiannual Financial Framework into a true Marshall Plan 2.0, the Commission would have to propose — and the EU’s national leaders would have to accept — a far bigger budget than anything previously suggested, along with a radical reworking of how the money is shared out. So far, there is no indication that anything that dramatic is being proposed or that it would be accepted.

It’s clear the EU budget will play some role in the economic strategy to tackle the crisis. But it’s also clear that the response will come above all from massive spending by national governments and a €750 billion asset-buying program from the European Central Bank, as well as other EU programs, possibly including the eurozone’s bailout fund and an unemployment reinsurance scheme proposed by the Commission last week.

Still, however, politicians can’t resist reaching for the comparison with the European Recovery Program — popularly known as the Marshall Plan, after U.S. Secretary of State George C. Marshall.

European Council President Charles Michel talked just a couple of weeks back about “what I call a Marshall Plan-like stimulus strategy.”

The original Marshall Plan used grants to help revive production in Western European economies that had been devastated by World War II.

The assistance was to be accomplished by “promoting industrial and agricultural production,” as well as “furthering the restoration or maintenance of the soundness of European currencies, budgets, and finances” and “facilitating and stimulating the growth of international trade of participating countries with one another and with other countries by appropriate measures including reduction of barriers which may hamper such trade,” according the 1948 U.S. Economic Cooperation Act.

The Marshall Plan came with some strings attached. “European integration was a primary requirement,” said Benn Steil, a senior fellow and director of international economics at the Council on Foreign Relations think tank, who wrote a book on the Marshall Plan. A key condition was that Communist parties could not take part in coalition governments in recipient countries. “The U.S. made clear that they would cut Marshall aid if the Communists were ever allowed back in power,” Steil said.

American assistance in 1948-1952 amounted on average to 2.6 percent of the economic output of recipient countries, according to Steil. In nominal terms, grants totaled $13.2 billion — 1.1 percent of U.S. output at the time, he noted.

The European Commission’s original proposal for the 2021-2027 EU budget, by contrast, was the equivalent of merely 1.11 percent of the bloc’s Gross National Income (GNI), a measure of the size of the economy that includes output and other elements. And when EU leaders failed to agree on the budget at a summit in February, they were looking at a compromise of around 1.07 percent of GNI.

“The EU budget definitely is not big enough and won’t be big enough to be the main tool to tackle the economic crisis,” one national official, who spoke on condition of anonymity, said in a text message. “National fiscal stimulus (backed by actions from European Central Bank) is going to be key.”

Politicians in Brussels are also skeptical.

“Of course, there is a need for a significant stronger EU response to the corona pandemic and its economic fall out,” Johan Van Overtveldt, chair of the European Parliament’s Committee on Budgets, wrote in a text message. “How can you do that with a budget amounting to more or less 1% of GDP??”

Experts agree that on its own, the EU budget won’t be enough to address Europe’s economic challenges.

“If the budget remains at its current order of magnitude, at 1 percent of GNI — and it is very hard to see how that would alter — and the traditional demands continue to be imposed, particularly for agriculture and cohesion policy, the margin for launching something massive is going to be pretty limited,” Iain Begg, a professorial research fellow at the London School of Economics, said in a phone interview.

Another major obstacle to von der Leyen’s ambition is the willingness — and ability — of member countries to pay for a lot of new spending at EU level.

The bulk of EU budget spending comes from contributions from national treasuries, based on the size of their economies. French President Emmanuel Macron last month floated the idea of a bigger EU budget to address the crisis — but did not directly offer to pay more into the bloc’s coffers. Other leaders have also thus far tiptoed around the politically charged question of how much money national capitals would have to transfer to the EU if the bloc opts for more ambitious recovery spending.

Many national leaders will also be wary of fueling anti-EU populism if they are accused of spending too much at a EU level at a time of acute need at home. Hélène Laporte, a member of the European Parliament from Marine Le Pen’s National Rally, described a possible increase in the French contributions to the EU budget to help address the crisis as “madness.”

At the same time, many EU governments are unlikely to agree to cuts to traditionally major areas of EU spending that benefit them, like subsidies for farmers, in order to pay for the recovery.

The European Commission says it will present a revised budget proposal soon. But there’s no sign it will include radical changes to the existing structure.

“There won’t be a completely new draft that will be changed from A to Z. Rather, there will be readjustments, especially in the area of investments,” Michael Hager, chief of cabinet for Commission Executive Vice President and economic policy chief Valdis Dombrovskis, said last week.

Experts say that what Europe needs in the age of coronavirus is not the equivalent of the grants-based Marshall Plan, but rather a blueprint that would ensure a Marshall Plan won’t be needed in the future.

“In my view, the priority should be right now to stop a collapse in output capacity, both in the United States and Europe. I think it’s critical to keep companies that are basically good and solvent alive … so when the pandemic is finally wound down, we can revive production quickly,” Steil said.

“We don’t want to be in the position we were after World War II, when these economies were destroyed and we had to rebuild them. We want to make sure that these economies are not destroyed, that they are kept alive in the interim, and in many cases that means lending, not grants,” he added.

The EU budget could play a role in generating some lending, following the model of its proposed InvestEU program, which brings together public and private investment by using cash from the budget as guarantees.

“Where I think there is scope for something a bit more imaginative is in a variation on the InvestEU,” Begg said, adding that “you could see that there is a way to mobilize the conjunction of further quantitative easing [from the ECB], a new role for the European Stability Mechanism, the guarantees from the EU budget, to provide quite a substantial amount of loan finance, as opposed to grants.”

That won’t amount to a new Marshall Plan but that may not stop EU officials using the phrase.

One senior diplomat said he does not expect the next long-term budget to be “radical and revolutionary, but of course somebody can always label it ‘Marshall.'”