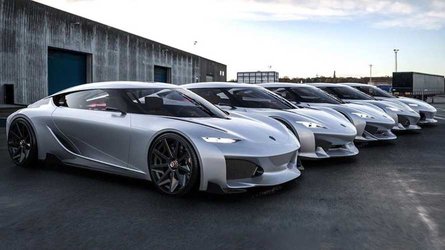 The Koenigsegg Gemera likely would have been one of the big stars of the Geneva Motor Show, if the event had happened. It’s the Swedish brand’s first four-seat model but doesn’t give up a bit of the firm’s famous performance capability by packing a 2.0-liter twin-turbo three-cylinder engine with three electric motors making a total of 1,700 horsepower (1,268 kilowatts) and 2,581 pound-feet (3,500 Newton-meters) of torque. Now, Raw Design House, an agency that’s part of the Koenigsegg Group, shows off some alternate, yet rejected, takes on the vehicle’s look.

From looking at this lineup of designs, Raw Design House had a very good idea of how the Gemera should look and just made minor tweaks to the appearance. The lineup in the company’s photos shows the firm experimenting with the sharpness of the point for the vehicle’s nose and whether to cant the headlights inward. There are also a variety of ideas for the lower fascia.